Birth of a Movement
For many, the riots that occurred in June of 1969 at the Stonewall Inn in New York City’s bohemian Greenwich Village mark the beginning of the modern LGBTQ+ liberation movement. Indeed, June is celebrated as LGBTQ+ Pride month around the world in commemoration of that moment when drag queens and other patrons of the Stonewall Inn finally had enough of the blatant discrimination against them and spontaneously fought back against the police who frequently harassed them.

What is perhaps less known is that the Stonewall uprising was not the first time an LGBTQ+ community fought back against authorities. Other, equally important rebellions took place as much as ten years earlier at establishments in Los Angeles and San Francisco.

For decades, police brutality against LGBTQ+ people was routine throughout the United States. Homosexuality, cross-dressing, and same-sex kissing and the like were illegal in many American cities, and LGBTQ+ individuals were perceived as “trash” or a “problem” that needed to be swept away or removed from public view instead of as citizens with rights or simply as human beings deserving respect. Raids of gay establishments led to arrests when patrons’ outer appearance did not match the sex printed on their ID. Undercover officers, disguising themselves as “gay,” infiltrated bars in order to entrap unwary customers and arrest them once they crossed a line. Police harassment sometimes turned to physical violence in the form of beatings.

This abuse was not always met meekly. Perhaps emboldened by the cultural shifts of the 50s and 60s, LGBTQ+ persons on at least a few occasions reached a boiling point and chose to stand up for themselves. It is now recognized that the earliest known occurrence of an LGBTQ+ rebellion occurred at Cooper’s Do-nuts, a small pastry shop in Los Angeles, California, in May of 1959, a full ten years before the events at the Stonewall Inn.

Located in the Skid Row neighborhood of downtown Los Angeles between two gay bars, Harold’s and the Waldorf, Coopers Do-nuts was in a way unique. Frequented by police officers during the day, and drag queens, transgender persons, and gay sex workers at night, it was perhaps inevitable that this location would become a site of confrontation and crisis.

On a night in May 1959, some police officers decided to check IDs, which resulted in the arrest of five customers. Suddenly, the frustrated customers exploded in righteous anger. Throwing whatever they found at hand–coffee cups, cutlery–the small crowd drove the officers out of the establishment and into the street. Returning with more police, the rioting by the group forced officers to close off the street. Although not as large as later rebellions, the event marks the first recorded time a group of LGBTQ+ persons fought back against the institutionalized system of oppression then in place.

Another, similar incident occurred in 1966 at Compton’s Cafeteria in the Tenderloin neighborhood of San Francisco, California. On the corner of Taylor and Turk, Compton’s had become one of the few places that transgender persons would gather in public. Their presence was not welcome, however, by the staff and management of the cafeteria, who believed that their presence was bad for business.

Management’s solution was to create a service fee applied to the transgender customer only. Moreover, they made no secret of their bias and blatantly harassed the transgender patrons in an effort to get them to leave. That August, pioneering activists staged a picket in front of the cafeteria in response to some police arrests in the transgender community.

When a group in the crowd began to get loud and disruptive, the management called the police. Then, when an officer who had a reputation for being abusive to transgender people attempted to arrest a transgender woman, she threw coffee in his face. Rioting ensued. Furniture was thrown, and the plate glass windows of the cafeteria were broken. The windows of a police car were smashed, and a small newsstand was burned down.

A second night of activity drew a larger crowd. The demonstration ended with the newly installed plate-glass windows being smashed again. The exact date of the riot is unknown because 1960 police records no longer exist and the riot was not covered by newspapers.

As a result of the confrontation, a community of transgender individuals formed and grew, and in 1968 they created the National Transsexual Counseling Unit (NTCU), a peer-run support and advocacy group, the first such organization in the world.

Today a plaque can be found at the corner of Turk and Taylor. It reads in part “Here marks the site of Gene Compton’s cafeteria where a riot took place one August night when transgender women and gay men stood up for their rights and fought against police brutality, poverty, oppression and discrimination in the Tenderloin. We, the transgender, gay, lesbian and bisexual community, are dedicating this plaque to these heroes of our civil rights movement.”

Riot at The Black Cat Tavern

A third tremor from the incipient LGBTQ+ community occurred at The Black Cat Tavern, a gay bar in Los Angeles, California, on the night of New Year’s Eve 1966. Unbeknownst to the bar’s customers, several plain-clothes police officers had secretly infiltrated the bar with the plan to cause mayhem and arrest patrons. At the stroke of midnight, as predicted by police, several customers kissed in a traditional New Year’s ritual. Considered “lewd conduct” at the time, the kissing was the cue for officers to begin beating and arresting the unsuspecting holiday revelers. Undercover police officers aggressively beat several persons, including one man who was severely beaten in the head with a pool cue.

The violence spilled into the street, which created a riot in the immediate area that expanded to include another nearby gay bar called New Faces, where officers knocked down the owner (a woman) and beat two bartenders unconscious.

This police brutality sparked a civil demonstration, on February 11, 1967, to protest the raids. Organized by a group called PRIDE (Personal Rights in Defense and Education) over 200 people were met by multiple squadrons of armed policemen.

Instead of quelling the protestors, however, something quite different occurred that day: the birth of a new community. The days of unchecked aggression were coming to an end.

In 2008 the site of the Black Cat Tavern was declared a Los Angeles Historic-Cultural Monument. After operating as a gay bar under several names, on November 30, 2012, the site became a restaurant named The Black Cat. It is no longer a gay bar, but houses an extensive and impressive exhibit of photos and artifacts from the events of 1966/67. 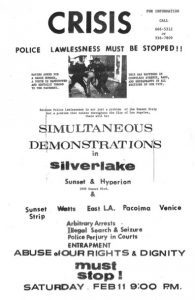 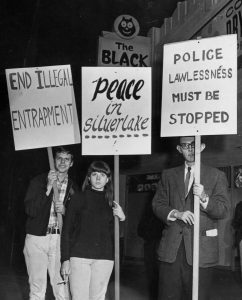 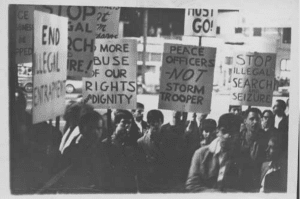 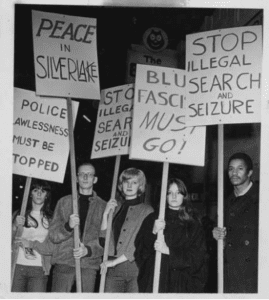 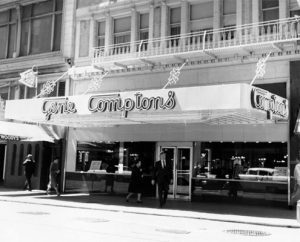 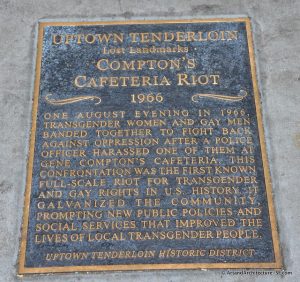 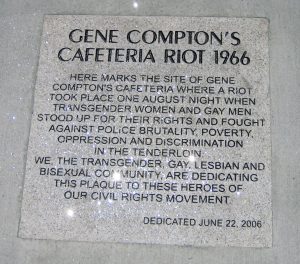 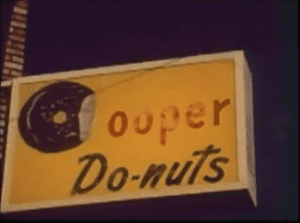 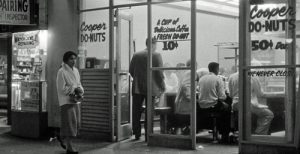