Rudolf “Rudi” Gernreich (August 8, 1922–April 21, 1985) was an Austrian-born American gay activist and fashion designer whose avant-garde clothing designs are generally regarded as among the most innovative and dynamic fashion designs of the 1960s. As one of the original five founding members of the Mattachine Society, one of the earliest gay rights organizations in the United States, he played a key role in the advancement of LGBTQ+ rights at a time when it was quite dangerous to do so. Throughout his long, unconventional, and trend-setting career, he purposefully used fashion to advance sexual freedom, women’s liberation, and LGBTQ+ rights, and to expand society’s perception of what was acceptable in the public sphere.

He was the first to use cutouts, vinyl, and plastic in clothing. He designed the first thong bathing suit; the first swimsuit without a built-in bra; the minimalist, soft, transparent No Bra; unisex clothing; and the topless monokini. He was a four-time recipient of the Coty American Fashion Critics Award, and produced what is regarded as the first fashion video, Basic Black: William Claxton w/Peggy Moffitt, in 1966.

Gernreich was the only child of Siegmund Gernreich and Elisabeth (née Müller) Gernreich, a Jewish couple who lived in Vienna, Austria. His father was a stocking manufacturer who had served in World War I and who committed suicide when Gernreich was eight years old.

Gernreich learned about high fashion from his aunt, Hedwig Müller, who with her husband Oskar Jellinek owned a dress shop. He spent many hours in his aunt’s shop sketching her designs for Viennese high society and learning about fabrics. Here he also gained early impressions of sexuality. He later told one of his favorite models, Leon Bing, about images of “leather chaps with a strap running between the buttocks of street laborers’ work pants and the white flesh of women’s thighs above gartered black stockings.” When Gernreich was 12, Austrian designer Ladislaus Zcettel saw his sketches and offered Gernreich a fashion apprenticeship in London, but his mother refused, believing her son too young to leave home.

After the German Anschluss (when Nazi Germany annexed Austria) on March 12, 1938, Gernreich’s mother took 16-year-old Rudi and escaped to the United States as Jewish refugees, settling in Los Angeles, California. His first job was washing bodies to prepare them for autopsy in the morgue of Cedars of Lebanon Hospital. He told Marylou Luther, “I grew up overnight. I do smile sometimes when people tell me my clothes are so body-conscious [that] I must have studied anatomy. You bet I studied anatomy.”

Gernreich met Communist and early gay activist Harry Hay in July 1950, and the two became lovers. Hay showed Gernreich The Call, a document outlining his plan for a gay support organization, and Gernreich told him, “You know that I’m an Austrian refugee. This is the most dangerous thing I have ever read. And, yes, I’m with you 100 percent.” Along with Hay and a handful of others, Gernreich was a founding member and an enthusiastic financial supporter of the Mattachine Society, although publicly preferring to be known by the initial “R”.

In 1951 Gernreich was arrested and convicted in a police homosexual entrapment case, which was common in Southern California at that time. Gernreich ended his relationship with Hay in 1952.

In 1953, Gernreich met Oreste Pucciani, future chairman of the UCLA French department, who was a key figure in bringing Jean-Paul Sartre to the attention of American educators. Oreste Pucciani was also a pivotal figure in the gay rights movement. The two men kept their relationship private, as Gernreich believed public acknowledgment of his homosexuality would negatively affect his fashion business.

Gernreich never announced his sexual orientation. Moffit said, “He just thought his sexuality was obvious.” Gernreich typically wore a toupée, Gucci loafers, and jumpsuits with industrial zippers and drove a white Bentley around West Hollywood where he lived with Pucciani until he died of lung cancer on April 21, 1985, at 62. Oreste Pucciani, Gernreich’s partner for 31 years, endowed a trust in their name for the American Civil Liberties Union in 1988.

During his career, he was compared in influence to the fashion houses Balenciaga, Dior, and André Courrèges, but he steadfastly refused to show his designs in Paris. He developed a reputation as an avant-garde designer who broke many design rules.

In 1967 Gernreich was featured on the cover of Time with models Peggy Moffitt and Leon Bing. The magazine described him as “the most way-out, far-ahead designer in the U.S.”

In 1985 Tom Bradley, the Mayor of the City of Los Angeles, proclaimed August 13 as “Rudi Gernreich Day” in recognition of Gernreich’s contributions to fashion and Los Angeles, declaring “His designs were social commentary and forecast on our times and the future lifestyles of our nation.”

From 1942 to 1960, Gernreich worked with a variety of top designers, designing everything from dance costumes, to swimwear, to shoes. Famous names he worked with during this period include Lester Horton (whose modern dance company Gernreich also danced for), George Carmel in New York, Morris Nagel of Versatogs, Walter Bass in Beverly Hills, and Jack Hanson, the owner of Jax, an emerging Los Angeles boutique that focused on avant-garde clothing that was fun and adventuresome.

He introduced, in 1952, the first swimsuit without a built-in bra, forgoing the stiff inner construction and boned linings of the time. His designs used elasticized wool knits that clung to the woman’s body instead.

In 1960 he founded his firm G.R. Designs in Los Angeles. And in the early 1960s, Gernreich opened a Seventh Avenue showroom in New York City, where he showed his popular designs alongside his own more expensive line of experimental garments.

Gernreich is perhaps best-known in the fashion world for his design of the first topless swimsuit, which he called the “monokini.” Gernreich conceived of the monokini at the end of 1963, after Susanne Kirtland of Look asked him to draw a suit to accompany a story about futuristic trends. The monokini bottom ended at mid-torso and was supported by two straps between the breasts and around the neck.

When the photographer William Claxton’s photograph of his wife Peggy Moffitt modeling the design was published in Women’s Wear Daily on June 4, 1964, it generated a great deal of controversy in the United States and elsewhere.

He initially did not intend to produce the design commercially, but Kirtland of Look urged him to make it available to the public. “I thought we’d sell only six or seven, but I decided to design it anyway.” Moffitt later said that the monokini “was a political statement. It wasn’t meant to be worn in public.”

Gernreich preferred that his designs should be worn braless, and in October 1964, at the request of the brassiere manufacturer Exquisite Form, Gernreich announced the “No Bra.” The bra was made of sheer fabric without underwire or lining of any kind. Unlike contemporary bras, his design allowed breasts to assume their natural shape, rather than being molded into an aesthetic ideal.

The No Bra was a big departure from the sculpted, bullet-shaped bosom of the previous decade. It was quite similar to the original bra of the 1920s and like the first modern bra invented by Mary Phelps Jacob, two handkerchiefs attached to a band and tied around the chest. Gernreich’s No Bra was little more than that.

Gernreich developed strong feelings about society’s objectification of the human body and disagreed with religious and social beliefs that the body was essentially shameful. He wanted to reduce the stigma of a naked body, to “cure our society of its sex hang-up,” as he put it. “To me, the only respect you can give to a woman is to make her a human being. A totally emancipated woman who is totally free.” 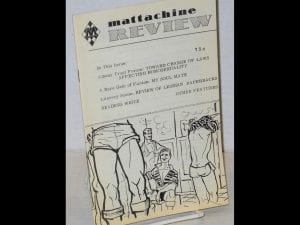 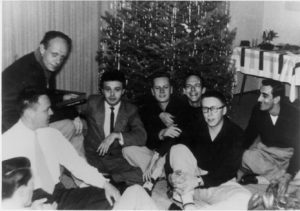 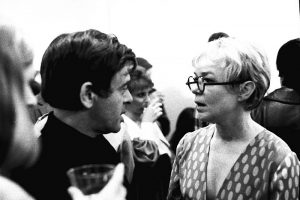 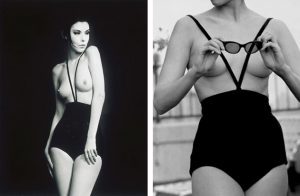 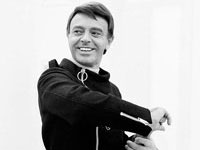 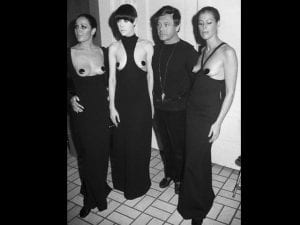 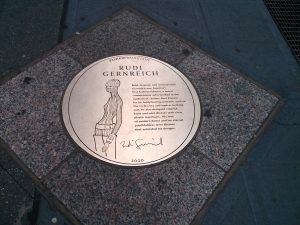 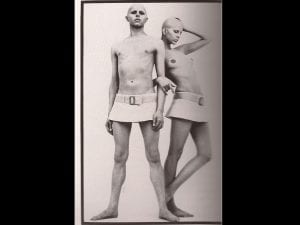 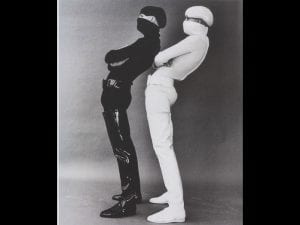 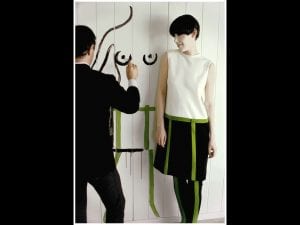 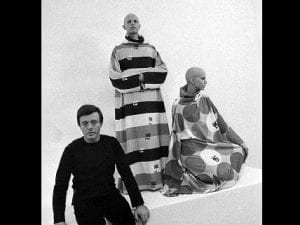 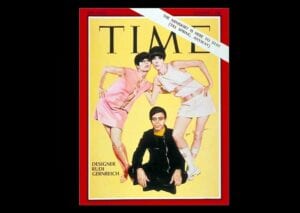 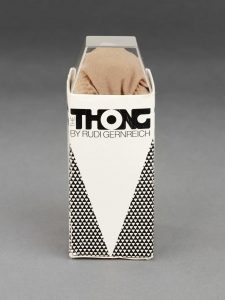 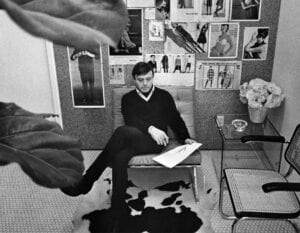